A Farmer’s Breakfast, and Then a Wander

When the actor Michael Emerson, 59, walks around Manhattan, it’s not unusual for people to stop him and ask if he’ll pose for a picture. The television shows “Lost” and, currently, “Person of Interest” have made his spiky hair, thick-rimmed glasses and long sideburns a giveaway. He takes it in stride, even on Sunday, which he designates a day of leisure, reserved for meandering, cultural events and time with his wife, the actress Carrie Preston, 46 — who herself is recognized for her roles in “True Blood” and “The Good Wife” — and her extended family. The couple live with their rescue dog, Chumley, 4, near Columbus Circle. 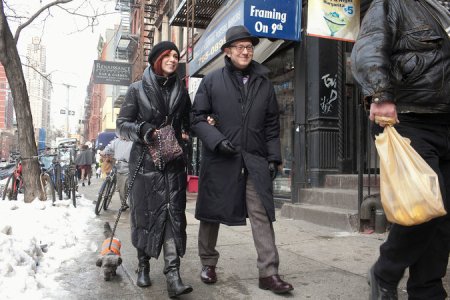 The actor Michael Emerson, 59, of “Person of Interest,” and his wife, the actress Carrie Preston, 46, of “True Blood” and “The Good Wife.” Credit Dave Sanders for The New York Times

HELLO, SUNSHINE Sunday is the most domestic day of the week. It’s the day when I feel the least pressure to get anything done. We get up fairly late, I suppose, around 9 o’clock. We throw open the shades that make the room dark and we make the bed. We’re like a synchronized team. We each have a shade to raise.

SQUARE MEAL Then we divide forces. Carrie gives Chumley his morning walk and I prepare the breakfast. Frankly, she’s sharper in the morning and I’m probably the better cook, so it makes sense. Plus, that relieves her of having to do the late-night walk, which is maybe a little more sinister. I make kind of a heavy, farmer’s, protein breakfast. Bacon and eggs, that kind of thing. She used to join me in that, but lately she’s making these green smoothies.

Mr. Emerson cooking bacon and eggs for a Sunday breakfast at his Manhattan apartment. Credit Dave Sanders for The New York Times
READING AND WRITING Then we take care of the paperwork, or I should say the electronic work. I may read the paper for a bit while she starts on the computer. Then I’ll join her and I’ll get my laptop out and try to answer correspondence and get a handle on the week to come.SHIFT GEARS Around noon, we’re still in our jammies, and that seems wrong somehow, so we need to get crackin’ and someone needs to shower first and then we get out of the house. She usually has more organized activities than I: a get-together with lady friends, or a rehearsal or a reading, or a meeting about one of her many film or TV projects. I dawdle longer.

MAN ABOUT TOWN If the weather’s fair, I like to take Chumley to Central Park and just walk around, do a bit of promenading with him. I dress more formally than a lot of the other boys do. If I’m going to be out and about on the town, I will generally wear a tie and a vest. Not necessarily a jacket.

FANS APPROACH I get recognized. It happens regularly, by two sets of fans: younger people who are fans of “Lost” and older people, oftentimes their parents, who are fans of “Person of Interest.” But now, I think the balance has shifted. Carrie’s so present on so many shows, with her vivid red hair, that people pick her out. Now I’m the one that people, they say, “Excuse me, could you take our picture?”